As the Dr. Martin Luther King Jr. federal holiday approached, a storm hung over Chicago, dropping eight inches of snow, delaying flights for hours, and temporarily slowing traffic on the entire South Side. But even as the temperature dropped and the wind picked up, University volunteers continued on with their plans for the campus and community-wide MLK Day of Service.

“I knew we were coming no matter what,” said Brandi Kenner-Bell, a University of Chicago Lab School parent and chair of the Black Family Forum at Lab. She talked while sealing bags of rice, dried vegetables, and soy for the Rise Against Hunger meal-packaging project. Her son was next to her, doing the same. “You can’t only do service when it’s convenient.”

That sentiment was echoed amongst the 233 or so volunteers who worked at 15 sites both on the University campus and in neighboring Woodlawn, Hyde Park, Washington Park, South Shore, and Bronzeville. Some organizations, like Featherfist, needed volunteers to help package emergency clothing bags for Chicago’s homeless population. Others, like the Oakwood Shores apartment community, needed help setting up for a large King Day event to be held on the actual holiday. Students were connected to these projects through the University Community Service Center (UCSC), a program within the University’s Office of Civic Engagement that provides students with opportunities to have a positive impact across the city through service.

Working on issues outside of the school-study bubble was good, said students and parents. Plus, this type of volunteerism is essential for the well-being of students, faculty, and community, said Shaz Rasul, who is the executive director of student civic engagement initiatives. “It’s about setting the framework.” The MLK Day of Service offered a prime opportunity to satisfy several needs at once. “Service is important. [It teaches] it’s not me as an individual, but me working as part of a group, and it’s around an issue.” 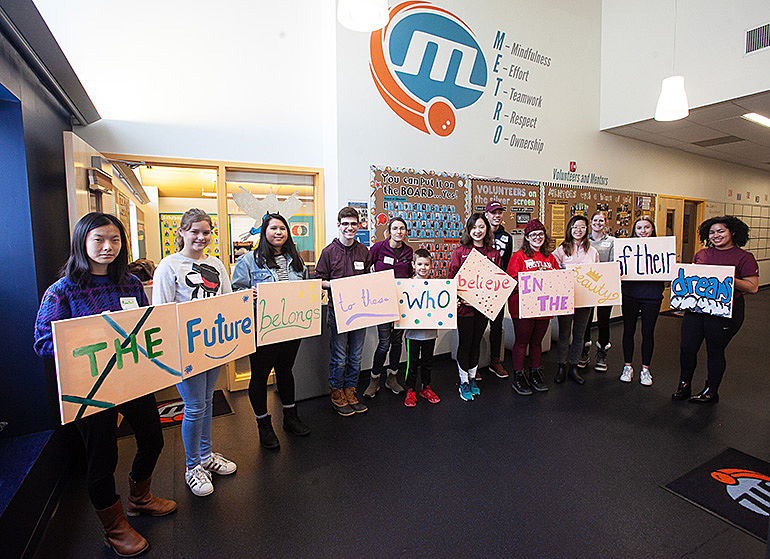 At MetroSquash in Woodlawn, undergraduates in the College, a Lab School family, and UChicago staff painted inspirational quotes on canvas to be displayed in the organization’s classrooms.

After the work was completed, the groups returned from their service sites to talk about the legacy of Dr. King, who would have approved of any activity that brought communities together to improve anyone’s quality of life, the students agreed.

And even the little people could get into the conversation. Six-year-old Micah, a bubbly Lab student, was happy to offer that he had plenty in common with Dr. King and that he was helping his dad, his mom, and his grandma package food at school for children who didn’t have the same.

“He says Martin Luther King tried to make the world a better place,” said Rena Dascal, Micah’s mom, while the entire family poured, sealed and packaged packs of food. This year is the family’s second time volunteering with this project. “It’s great experience for my kindergartner.”

The sheer variety of service opportunities is a boon for everyone involved, said Todd Barnett, the director of partnerships with UChicago Charter School. “They are able to find out what resonates with them,” he said. “The holiday comes once a year, but the needs are all year. We’re building deeper relationships.”

And while the elementary schools start out teaching young kids the importance of civil rights and service, it is never too late to take action. Many of the graduate and undergrads present were participating in their first MLK Day of Service.

“It is good for undergrads and grads to do this,” said first-year Alex Hayward. “Having people learn about [UChicago’s relationship with its neighboring communities] through the project and not only just talk about it, but to also engage in some type of community service, that’s so important.”

Each volunteer site had a different goal, but the Rise Against Hunger project alone filled some 35,000 bags of the rice-soy-veggie mix. Upon delivery to an area suffering from disaster, all a person needs is a pot, a heat source, a few liters of potable water and 20 minutes to cook up life-saving food. After filling and sealing those bags, they were placed in boxes that were later loaded onto shipping pallets. Thousands of meals were prepped and packed in just a few short hours. When the numbers were announced over a loudspeaker, the crowd at Lab cheered.

Many are now ready to do more.

“I found it really satisfying to see the huge stack of boxed meals at the end, as evidence of the group effort we'd put in all morning,” said Paul Jerger, a fourth-year graduate student at the Institute for Molecular Engineering who was participating in his first MLK Day of Service at UChicago. “I was really impressed with how many partner organizations UCSC was able to coordinate for the day. I'm looking forward to exploring some of the other projects and volunteering with new people next year.”